I'm getting a MiFi for mobile broadband. My choices are Sprint and Verizon. I already have Verizon FIOS and a home phone.

Does anyone else have a FIOS bundle and a MiFi and can tell me what you pay so I don't pay too much over the next two years?

My phone needs are taken care of by Google Voice, so I won't have a voice cell line.

I pay $50 for FIOS internet every month, $8 for my home phone, plus taxes. Both Sprint and Verizon offer 5GB mobile broadband for $60/mo. Verizon says I can get a $15 discount if I bundle a "cell phone" with current services.

With a two year contract, Sprint provides the MiFi for free after rebate. Verizon doesn't have a rebate, so the MiFi is $50. Verizon offers pay-as-you-go plans, but their rates are laughably inflated (.5 GB for $50 month to month).

Anything I'm missing that would let me get a better deal out of either side?

Open to: All, detailed results viewable to: All. Participants: 23

Did you go to the same high school as one or both of your parents?

Value of a static IP:

A Johns Hopkins University student armed with a samurai sword killed a man who broke into the garage of his off-campus residence early Tuesday, a Baltimore police spokesman said.

Open to: All, detailed results viewable to: None. Participants: 17

Do you own a sword or long blade that is stored at home?

Could you use a sword effectively in self defense?

How awesome is that JHU student?

I'm thinking about writing a short article about how the recent threats from the credit card companies are going to change people's habits. I'd like to get a feeling for how y'all plan to or are handling the recent changes. Results are hidden, except to me. Comments welcome!

Open to: All, detailed results viewable to: None. Participants: 18

Credit card companies are saying they might take away grace periods and start charging interest immediately. If that happens, what will you do?

Would you drop a credit card that started charging interest?

Would you drop a credit card that started charging a monthly fee but kept a grace period?

Do you carry a balance from month to month?

If you had to pick one, which would it be:

Open to: All, detailed results viewable to: All. Participants: 23

Other suggestions in the comments.

Comment to this post and I will give you 5 subjects/things I associate you with. Then post this in your LJ and elaborate on the subjects given.

This is what distinguishes me from the classic libertarians I hang around with.  I like liberty and human rights and freedom to travel, consume, speak as I wish, defend myself, etc. but I really don't have a problem paying taxes so that those who were born or wind up less fortunate than I am can do their thing too.  I'm glad there are outspoken people who protest against taxes and keep us out of a full-on income redistribution in this country, but also I'm glad that an elected and accountable government is maintaining our parks, schools, and roads, and has the money to do it.

If you didn't get it right in the field, don't touch it up in post-edit.  Photography is about capturing what you see, not what you wish you saw or wish you could have captured.  That's a different kind of art.  Folks don't like to argue with me about this, and I have thousands and thousands of pictures that people enjoy that are exactly the way I caught them using only the settings of my camera at the moment I took them.

Love em.  Think (almost) everyone should have some.  Thinks anyone who wants to regulate or is afraid of firearms should take a training class and go out with a responsible friend who enjoys them.  In the Supreme Court case Castle Rock vs. Gonzales they determined that individual police protection isn't a constitutional right even with a restraining order.  The police exist to protect the public good not the individual.  If you leave your safety exclusively to the police, you are leaving it to folks who have an interest but not an obligation to protect you.  The obligation remains yours.

If you watch Firefly, you'll remember the episode "Jaynestown."  At the very end, Mal Reynolds says to Jayne Cobb, "It's my estimation that every man ever got a statue made of him was one kind of sommbitch or another. Ain't about you, Jayne. It's about what they need."  For everyone who has a silkscreen of his high-contrast face on their tee shirt, he's what they need.  What they do with that is up to them.

It's not dying, but the participants are.  Today has me a little melancholy about this topic.  In going through my e-mail I found out that back in January a fellow by the name of Guy Falcioni, callsign K2IH, passed away at the age of 85.  This is the guy I consider to be my "elmer" in ham radio, having explained a lot about radio, on-air etiquette, and all manner of nuances of communication when I got my ham license at 16.  He's part of the generation of radio operators that got entranced by radio during the war or finding employment as radio engineers or electronics technicians.  And slowly but surely, they are becoming "silent keys." 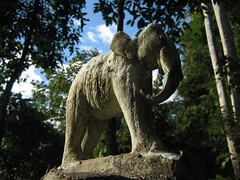 Behind the Laptop
Originally uploaded by Dawn Casey
The Casey kittens, Geronimo and Haliburton. 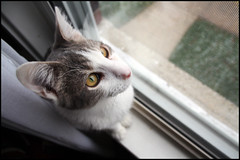